How would you like to see PvP in WH:O

PvP content is usually a big element to a lot of MMORPG’s and I for one am very fond of PvP content that is in Runescape, despite not playing the game in over 8 years I still find myself watching people PvP in Runescape as I find it to have a good system down. Which brings me to this.

Can we fight other players/PvP? There will PvP elements like dueling and we’re also planning open world PvP sometime in the future. - Difinitus

Personally I would like to see it implemented as another way of gaining money, they said there will be a dueling arena which will most likely just be a fun thing that doesn’t affect gameplay but as for the open world PvP I think it would be great to see part of the map where anyone can die to a player and obtain a % of the players loot they drop on death, this might end up in high level players trying to PK lower levels but there can be a work around for this.

With all that said I definitely think in a later stage of the game, not while the game is still getting built up, PvP should become a large aspect of the game and a means to make money on the side of questing, grinding, merching, etc. To be honest I love the thought of unrestricted PvP the most but I would love to hear everyone else thoughts on how PvP should be implemented into the game.

I’d like to have a PvP system oriented in a Guild vs Guild approach; It would create a massive quantity of PvP but not griefing. As well, I’d like to have battlegrounds or Duels avalaible in the open world. I wouldn’t implement a full loot system because it’s to harsh for the smaller or low-ranked player.

I support your idea. An arena that is ranked with the better fighters who participate in it. The best would be paired with the best, so the arena is not a PvP random grinder.

I don’t like pvp at all. As I read most of you do like pvp. If it would be implemented in the game, it should be in a kind of arena. No rewarding system and just for fun. Just to see how strong you are against others.
The reason why I think this way, is because ppl aged from 11 years old, or younger will be a part of it to. So no bounties on someone’s head…no items taken…etc.

An arena with absolutely no rewards would be a complete waste of time to implement. If the only PvP available was at an arena and there were no rewards why would people go there to use it. If the arena had incentives like staking where it’s in a trade like fashion and players just match each other in gold value and who ever wins gets to take everything then I can see the arena being useful. Other than that there would be no point in implementing an arena with nothing of value inside of it. Also the arguments that kids will be playing the game isn’t a very good one, kids these days are out there playing games worse than an MMORPG with no gore. @Hex

@PixelRage. In my opinion gaming is for fun. I think gaining cash or gold will be supplied in other things than pvp, so no need to put in pvp. If you want to play pvp with a reward of some kind, you can decide between players. Doesn’t has to be implemented in a game. That kids playing worse games is bad. They shouldn’t have access to those games at all. An arena was just an example…im not a developer

There would be a PvP content as Devs noted in the interview. Duels (suppose to train vs other classes/players) and PvP-zones (suppose, to fight for some kind of rewards/benefits/bonuses). Best scenario - ranks system and various activities/modes

@Soga In CH there is arena, centre and tavern. All pvp areas. No rewarding system. Unless you chose.

Still hoping they woun’t skip out on PvP-activities and soft rewards.

A simple flag system like WoW would be ideal. Open world pvp is a must for me. I don’t know how difficult it would be to implement but the dev’s should definitely try to emulate Blizzard’s instanced pvp zones approach:

Playing MMOs since the days of Meridian 59, they used a bounty system for most part, if you killed another player you got flagged as a PKer. Entire world would become your enemy and you got hunted, a lot became PKer Killers. This was a very fun way to play, PKer flag would get removed though if they got killed of course the community never forgot names of PKers and usually wasn’t long before their names were flagged again as a PKer.

Another system for PvP was the Clan/Guild wars implemented by EQ, these wars were the greatest… especially when came to battling for the top bosses. Always made great for the 3rd tier guild that wasn’t at war sneaking in and stealing the boss from the battling guilds. Even had open world PvP which didn’t go over as well as the rest. Was only 1 PvP server, usually 1 guild become dominant and just controlled everything.

Runescape version of PvP also was a likable way, having areas of Wilds that were PvP the areas also having bosses in those areas enticing for brave adventures to try and brave the PKers.

So to sum my opinion of the PVP up, I like to see a combination of all these, having areas of so called Wilds (no penalty), the ability to Fight it out and wars of guild vs guild (set by leader), open PK (restricted with what they can loot, unable to be in a guild, pretty much they are a murderer and are solo) and of course arena battles, with actual Dev or leader controlled tourneys.

I love PvP in MMOs, always been one of my favorite aspects. Can’t have a good MMO without good PvP.

I’d like to see a large scale PvP mode where different factions fight each other, maybe having points of interests that opposing factions much take over or conquer. Kind of like ESOs large scale PvP campaigns which are pretty amazing.

I’d have to agree with Zkills, I love the Large Scale PvP where it really requires a little bit of teamwork and communication to effectively win the battle.

Could have like 30 day long cross server PvP campaigns that run nonstop, and at the end of the “season”, whichever faction captured the most control points/got the most kills gets rewarded. That’ll keep players busy and always give us something to do when there isn’t much else to do in the PvE world.

Honestly, This sound great to me. However I’m sure there are alot of PvE players that wouldn’t be very fond of this idea. I just hope there is a good mix between PvP and PvE to keep everyone happy.

Could have like 30 day long cross server PvP campaigns that run nonstop, and at the end of the “season”, whichever faction captured the most control points/got the most kills gets rewarded. That’ll keep players busy and always give us something to do when there isn’t much else to do in the PvE world.

It could be PvEvP as well, and then make the zone large enough so that you have a good chance of doing PvE stuff like faction based quests or grinding without having the opposing faction coming along and ruining your day lol. Most of the large scale PvP would take place at the control points with small skirmishes throughout the rest of the zone.

Faction based quests could also add to your factions “score”, that way if you don’t enjoy doing PvP you can still do other things to help contribute to the effort. Although just be mindful that it’s still a PvP zone, so every now and then you might run across the opposing faction who will then likely engage you lol.

Yeah, it would be very nice to have all of that, however I’m a bit worried what we will be getting in terms of PvP anyways from the article they did with MMORPG.com

Stating that PvP won’t be a very big focus on launch. 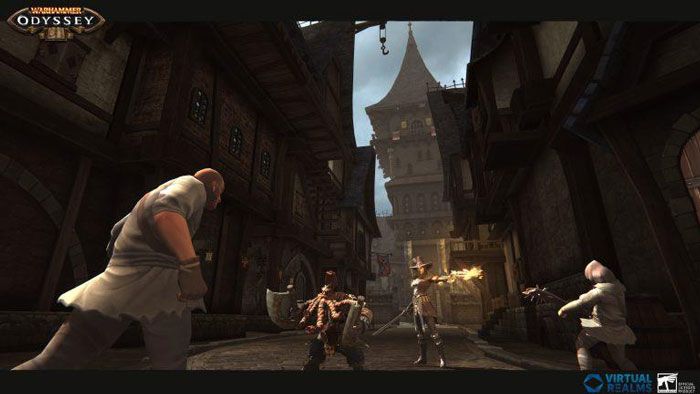 On August 27th, 2019 developer Virtual Realms announced Warhammer: Odyssey a mobile MMORPG for Android and iOS. The initial announcement didn’t provide many details about the game. Luckily, here at MMORPG, we were able to interview the developer and...

It’s a shame it won’t be an immediate focus. The PvE environment better be extra good lol